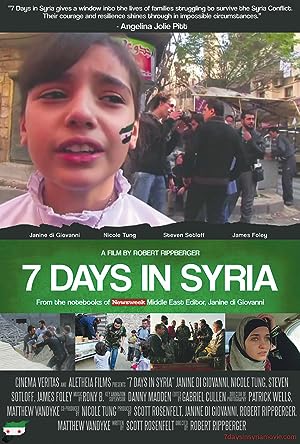 The cast of 7 Days in Syria

What is 7 Days in Syria about?

Newsweek Middle East editor, Janine di Giovanni, submitted a proposal to cover the war in Syria. The magazine denied the request, deeming the situation too dangerous. She decided to go anyway. The conditions are extreme with constant shelling and bombardment, threat of sniper fire, and kidnappings. Only two weeks before the trip her friend, James Foley, was taken by three armed men. A few weeks after the trip, Steven Sotloff, who she speaks with while in Aleppo, is also captured. Journalists are targets, and that much Janine knows. Yet, she and her crew put themselves in harm's way to bear witness and make sure the world knows about the suffering of the Syrian people. Along the way Janine meets a carpenter-turned-baker, a man considered to be a hero of Aleppo. His life is threatened daily by opposition forces, but he still makes bread to keep his neighbors alive. Then there's Waad, a Syrian woman who was studying economics until the university was bombed. She videos injuries and deaths of soldiers and civilians, a very important task for posterity and war tribunals. We meet the young doctors who work tirelessly at an understaffed hospital, a construction worker turned gravedigger, and a young girl, the future of Syria, almost killed by a mortar that goes off while she sings at the marketplace. 7 Days in Syria is a documentary feature unlike any other, offering a rare glimpse at life during war and the incredible lengths journalists go to shine a light in the darkest places on earth.

Where to watch 7 Days in Syria