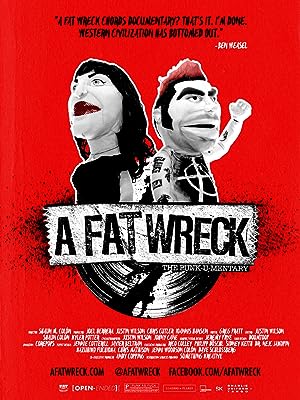 The cast of A Fat Wreck

What is A Fat Wreck about?

Fat Wreck Chords... The influential music label proud to say they've spent the past 25 years "ruining punk rock". A Fat Wreck tells the story of founders Fat Mike (of the legendary punk band NOFX) and his ex-wife Erin Kelly-Burkett, spanning the birth, growth, struggles, and survival of the Fat Wreck Chords label. Half inspirational story of chosen family and community, half debauchery and occasionally involuntary drug use... A Fat Wreck blazes exciting new ground in the cinematic genre of puppet-driven punk rock music documentary filmmaking. If you only see one film featuring a dominatrix spanking a puppet in your lifetime... Make it A Fat Wreck!

Where to watch A Fat Wreck