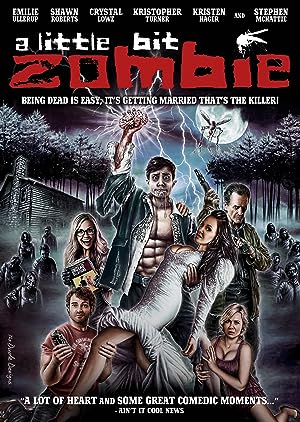 The cast of A Little Bit Zombie

What is A Little Bit Zombie about?

During a weekend at the family cottage in the woods, Steve, a soft-hearted corporate analyst, gets stung by a zombie killer mosquito right before his wedding with Tina, a bossy beautician. Together with them, is Steve's sister Sarah and her friend Greg, who really wish that Steve will soon come to his senses and realise that Tina is just not good for him. In the meantime, without knowing it, a team of zombie hunters, Max, a cold-blooded exterminator and Penny, a scientist with a blue zombie-tracking orb, are in the same woods looking for the undead. When Steve's pulse will begin to fade while at the same time his appetite for human brains will grow bigger, it will be obvious enough that the change has already begun, however, according to Tina, this will be only a minor setback before the big day. Eventually, Steve as a hybrid with his mutated DNA would help in the cure for the infection, but nevertheless, Max and Penny will still have to pass through Tina who really wants to get married.

Where to watch A Little Bit Zombie