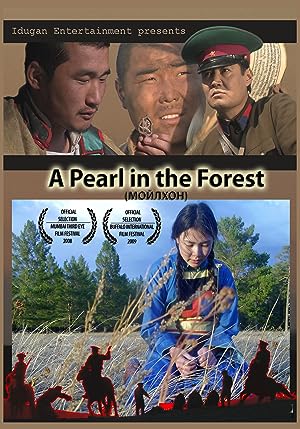 The cast of A Pearl in the Forest

What is A Pearl in the Forest about?

Is all fair when love becomes war? "Promises are like pie crusts: Made to be broken." In the 1930s Stalin put Lenin's words into action with his infamous "purges," bringing horrors to the people of Mongolia - a geographically unified nation that he broke up with the shattering fist of political force. In the midst of a Mongolian Buryat village Sendem is a young woman who has the curse of great beauty during this time of violent upheaval. Markhaa is the former villager who now returns to his hometown as a government spy. Although Sendem is already engaged to another, Markhaa is determined to use the power of his government authority to crush a village in order to take by force what he cannot win by love: the heart of Sendem. A tender blossom snapped from a tree and crushed underfoot, Sendem focuses her hope on the symbol of a hand-carved necklace once given to her by her fiancé ... and in a treasure more precious than a shimmering pearl, that she leaves behind in the shelter of a dark Mongolian forest.

Where to watch A Pearl in the Forest

More Drama movies like A Pearl in the Forest

More Drama tv shows like A Pearl in the Forest