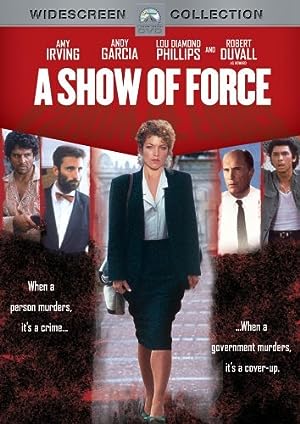 The cast of A Show of Force

What is A Show of Force about?

Porto Rico, 1978. The Antillian autonomous US Commonwealth is divided by supporters of becoming a full US member state and independence activists, including a violent wing the governor labels as terrorists. Divorced reporter Kate Melendez, widow of independista lawyer Juan, gets in personal danger when she stumbles on a dark set-up. Federal agent Jesus Fuentes officially infiltrated an operation to illegally broadcast a message on Constitution Day in which students Jorge Rey and Alfredo Ruiz are killed. He instigates kidnappings and murders, covered by powerful people. She's scared away, but the senate appoints a special investigator, Luis Angel Mora.

Where to watch A Show of Force

A Show of Force Trailer

More Drama tv shows like A Show of Force