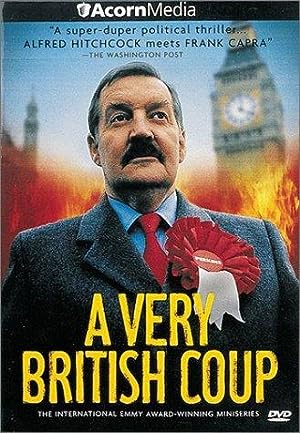 How to Watch A Very British Coup Online in The UK

The cast of A Very British Coup

What is A Very British Coup about?

Harry Perkins, steel worker and trade unionist from Sheffield, becomes Prime Minister of the UK by a landslide, partly because of corruption and public disillusionment with the Conservative Party and financial institutions of the City of London. The IMF, the military and their secret service "comrades" start to plot against of the elected PM. They are unhappy with the non-nuclear and neutral aspirations of his party (during the Cold War) and are supported in their fears by nationalistic media moguls. Quietly, the protagonist Harry is driven by an underlying desire to compensate for the corporate manslaughter of his granddad, "who were killed at work" when he was "splashed by molten steel". Harry inherited his shaving mug, nothing more, and was originally determined to see workers participate in decision making for safety on the job. As his national-political consciousness grew he formed a wider agenda for a reinvestment in health and education as well as public ownership of public utilities. Harry maintains his drive despite sex scandals, the suicide of his Chancellor of the Exchequer's wife and the assassination of his trusted military advisor Monty Kowalski. Harry says that "the dead [read: his grandfather, Annette Newson and Monty] ask the best questions, and we are answerable". He finds some personal support in his ex-lover Helen, a passionate advocate for alternate economic strategies, and Harry's spy in the corridors of power; Thompson, an investigative journalist. But ultimately this is a story about one man's passion. There is a haunting sound of helicopters in the background on the second election day scene. One imagines; is this the day when democracy has gone too far? Will the military take over? Even in a country like the UK? Or is it just a media Helicopter trying to document the radical change?

Where to watch A Very British Coup