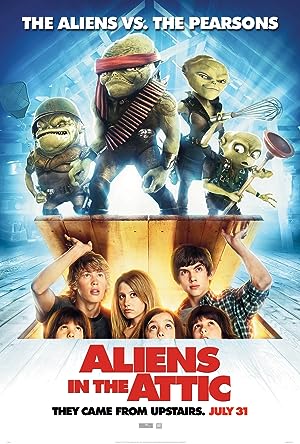 The cast of Aliens in the Attic

What is Aliens in the Attic about?

Stuart Pearson heads with his family to spend a summer vacation in Creek Landing, Michigan, with his brother Nathan Pearson and his sons and their mother Rose in an old lake house they had rented. When the television has trouble with the image, Stuart's son Tom and the arrogant boyfriend of his sister Ricky Dillman go to the attic and then to the roof, where Tom meets his cousin Jake and they find the antenna dish totally destroyed. Sooner they discover four alien invaders that are preparing an invasion of the Earth that use a mind control weapon that only affects adults and they lock the quartet in the attic. Now they need to a find a way to force the adults to leave the house and discover the vulnerability of the invaders to plot a defense plan to save our planet.

Where to watch Aliens in the Attic

More Adventure tv shows like Aliens in the Attic