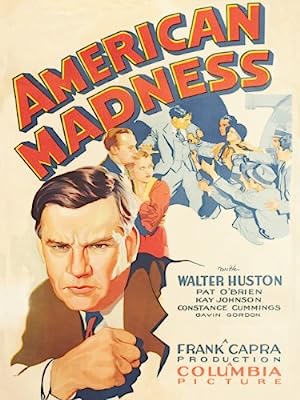 How to Watch American Madness 1932 Online in The UK

The cast of American Madness

What is American Madness about?

It's the 1930s, the Depression era, and the Board of Directors of Thomas Dickson's bank want Dickson to merge with New York Trust and resign. He refuses. One night, Dickson's bank is robbed of $100,000. The suspect is Matt Brown, an ex-convict whom Dickson hired and appointed Chief Teller. Brown, who's very loyal to Dickson, refuses to say where he was that night. He actually has two witnesses for his alibi, Mrs. Dickson and fellow worker Cyril Cluett, but Brown is protecting Dickson from finding out that Mrs. Dickson was with Cluett having a romantic evening. Cluett, who has a $50,000 gambling debt, is actually responsible for the robbery, but lets Brown take the rap. Will Brown's loyalty to Mr. Dickson pay off, or send him back to prison?

Where to watch American Madness