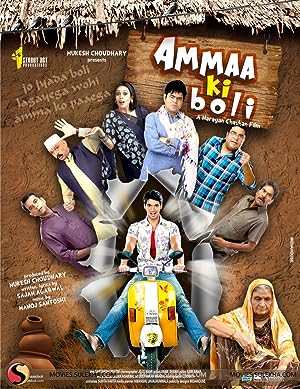 How to Watch Ammaa Ki Boli 2021 Online in The UK

The cast of Ammaa Ki Boli

What is Ammaa Ki Boli about?

Ammaa Ki Boli revolves around an old-aged husband-less mother Ammaa (Faruk Zafar), her 5 grown-up children's and a second-rate two-seater scooter living in a small town. Ammaa's five grown-up children's, namely Parmu (Govind Namdev), Jeetu (Sitaram Panchal), Rukmi (Sanjay Mishra), Kalavati (Himani Shivpuri) and Hari (Zakir Hussain), are all well-settled and have their own 2-seater vehicle. However only Rukmi doesn't have and thus he steals nearly Rs. 40,000/- from Ammaa's safe-box and buys a second class two-seater scooter. Soon the scooter met with a strange accident because of the two local boys and so does the exposure of robbing money from Ammaa. A group meeting was then finally called up and the scooter was declared as 'Sarvajanik Scooter' (multi-purpose scooter) where anybody and anyone in the family can use it. However this doesn't go down well with Rukmi and the story takes a complete turn in a sheer hilarious manner, where how it changes from the key of this second-rate scooter to Ammaa's funeral, forms the crux of the story. This film also deals with the importance of relations in present scenario; this is a satire on family relations between a mother and her five children which explained in a form of comedy.

Where to watch Ammaa Ki Boli