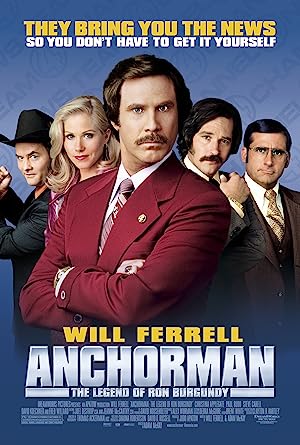 How to Watch Anchorman: The Legend of Ron Burgundy 2004 Online in The UK

The cast of Anchorman: The Legend of Ron Burgundy

What is Anchorman: The Legend of Ron Burgundy about?

In 1970s San Diego, journalism was a well respected profession and people actually cared about what they saw on TV. And the top rated anchor man in the city is Ron Burgundy. He enjoys his run at the top, and has for the last five years. And his news team is equally as good as he is. Professional jock and former professional baseball player Champ Kind handles the sports, the curiously dim witted Brick Tamland - who's a few channels short of a cable subscription - handles the weather, and ladies' man Brian Fantana - whose collection of fine scents would be in the Guinness Book Of Records - handles the on-field reporting. But now all that is about to change forever. The TV station Burgundy works for, Channel 4, has embraced diversity and has hired a beautiful new female anchor named Veronica Corningstone. While Ron Burgundy and the rest of the Channel 4 news team enjoys fighting with competitors, drinking, and flirting with the ladies, Veronica quietly climbs her way to the top. And Veronica's success drives Ron Burgundy crazy. So much that Veronica's meddling causes Ron to get demoted and ultimately lose his job with Channel 6. Now left with nothing, Ron must find a way to get back to the top - and that involves a story about a rare Chinese panda giving birth on US soil. Will Ron be the one to report the story on a national level?

Where to watch Anchorman: The Legend of Ron Burgundy

More Comedy movies like Anchorman: The Legend of Ron Burgundy