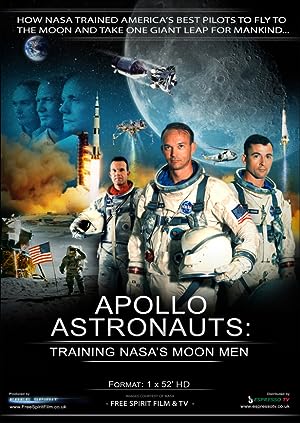 How to Watch Apollo Astronauts: Training NASA's Moon Men 2015 Online in The UK

What is Apollo Astronauts: Training NASA's Moon Men about?

In 1969, Neil Armstrong stepped onto the lunar surface and into the history books as the first of only twelve men to walk on the Moon. But in 1961 when Kennedy pledged to put a man on the Moon, NASA had barely put a man into orbit. They had less than 10 years to train a team of astronauts to overcome the unknown challenges of a mission to the Moon. What followed was a rigorous, intense training period that put America's first astronauts through their paces; testing their physical and mental strength, stamina, flying skills and bravery to ensure they were made of the right stuff. But Centrifuges, probing medical tests and jungle survival training was just the beginning, planting flags and footprints wasn't enough; the select few would not only need to pilot the complex spacecraft to and from the moon but also be skilled photographers, geologists and scientists. Featuring stunning NASA footage and expert interviews with Apollo space scientists, this inspirational film explores the early days of astronaut training, following those pioneering pilots from selection to the lunar surface and back again. This is the incredible story of how NASA trained America's best pilots to fly to the Moon, and take one giant leap for Mankind.