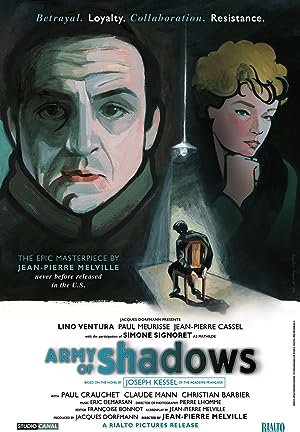 How to Watch Army of Shadows 1969 Online in The UK

The cast of Army of Shadows

What is Army of Shadows about?

France, 1942, during the occupation. Philippe Gerbier, a civil engineer, is one of the French Resistance's chiefs. Given away by a traitor, he is interned in a camp. He manages to escape, and joins his network at Marseilles, where he makes the traitor be executed... This non-spectacular movie (do not expect any Rambo or Robin Hood) shows us rigorously and austerely the everyday of the French Resistants : their solitude, their fears, their relationships, the arrests, the forwarding of orders and their carrying out... Both writer Joseph Kessel and co-writer and director Jean-Pierre Melville belonged to this "Army in the Shadows".

Where to watch Army of Shadows