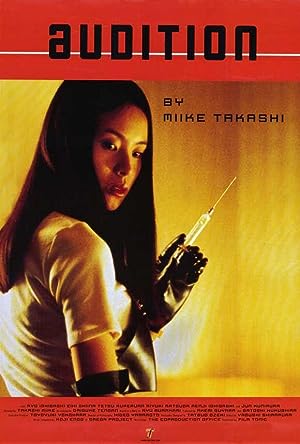 How to Watch Audition 1999 Online in The UK

The cast of Audition

What is Audition about?

In Tokyo, Shigeharu Aoyama is a widower that grieves the loss of his wife and raises his son Shigehiko Aoyama alone. Seven years later, the teenage Shigehiko asks why his middle-aged father does not remarry and Shigeharu meets his friend Yasuhisa Yoshikawa, who is a film producer, and tells his intention. However, Shigeharu has difficulties to approach to available women to date and Yasuhisa decide to organize a sham audition for casting the lead actress for the fake movie. They receive several portfolios of candidates and Shigeharu becomes obsessed by the gorgeous Asami Yamazaki. Despite the advice of the experienced Yasuhisa, Shigeharu calls Asami to date and he falls for her. But who is the mysterious Asami?

Where to watch Audition