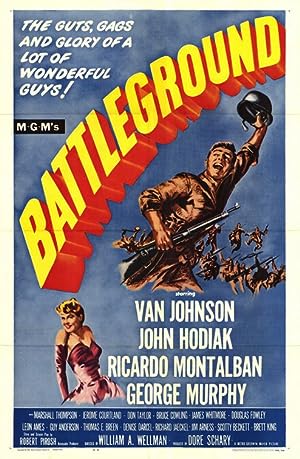 How to Watch Battleground 1949 Online in The UK

The cast of Battleground

What is Battleground about?

We follow a band of American soldiers as they engage the Germans in a snowy, foggy winter near Bastogne in World War II. They're low on fuel, rations, and ammunition; the Germans are constantly encouraging their surrender via radio and leaflets, and most importantly, the pervasive thick fog makes movement and identification difficult and prevents their relief by Allied air support. This film focuses much more on the psychology and morale of the soldiers than on action footage and heroics.

Where to watch Battleground