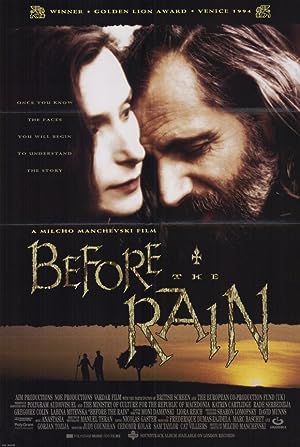 How to Watch Before the Rain 1994 Online in The UK

The cast of Before the Rain

What is Before the Rain about?

The circularity of violence seen in a story that circles on itself. In Republic of Macedonia, during war in Bosnia, Christians hunt an ethnic Albanian girl who may have murdered one of their own. A young monk who's taken a vow of silence offers her protection. In London, a photographic editor who's pregnant needs to talk it out with her estranged husband and chooses a toney restaurant. She wants permanence with her lover, a prize-winning Macedonian photographer just back from Bosnia, changed by the violence. He leaves abruptly for his village; he's not visited it in 16 years. There he tries to ignore bitter divisions between his Orthodox brethren and local Albanians, then tries to transcend them.

Where to watch Before the Rain