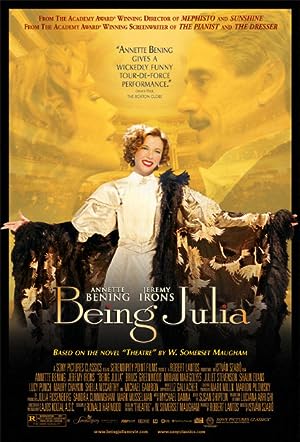 How to Watch Being Julia 2004 Online in The UK

The cast of Being Julia

What is Being Julia about?

1938. Julia Lambert and Michael Gosselyn are the royal couple of the London theater scene, Julia an actress and Michael a former actor who took over running the theater and its troupe upon the passing of their mentor, Jimmie Langton. Jimmie is still constantly with Julia in spirit as she navigates through life. Besides their work, Julia and Michael lead largely separate lives, they long ago having stopped a sexual relationship. Julia of late has been feeling disenchanted with her life, she not wanting to admit it's because she is approaching middle age. Her disenchantment manifests itself in wanting Michael to close their current production early so that she can recharge her juices, something he is reluctant to do if only for not wanting to let the theater sit empty. What Julia ends up doing instead is embarking on an affair with Tom Fennel, an adoring young American who is young enough to be her son. As Julia and Tom's relationship progresses, the more she falls in love with him and becomes dependent upon him for her happiness. But as she finds out that Tom is not as innocent and shy as he first made himself to seem, she may learn that Tom cannot be that direct conduit to happiness and fulfillment at this stage in her life. However, she may find an avenue through Tom that may truly reenergize herself for herself.

Where to watch Being Julia