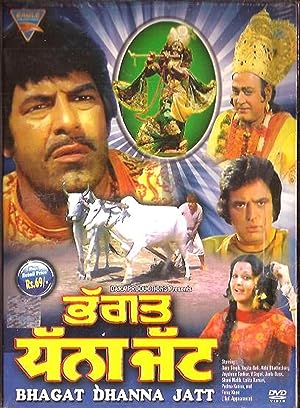 How to Watch Bhagat Dhanna Jatt 1974 Online in The UK

The cast of Bhagat Dhanna Jatt

What is Bhagat Dhanna Jatt about?

When Laali, who loves Shyamu, refuses to marry Kalidas, recommended by her aunt, her naive brother, Dhanna, and Bhabhi, Bhagwanti, are asked to leave and till a barren piece of land. When Dhanna is unable to grow anything, he decides to take the assistance of Thakara, none other than Bhagwan Shri Vishnu. He approaches Pandit Tirlochan in order to take the Diety to his residence. Tirlochan cons him by giving him a rock instead, and he brings it home, refuses to feed himself until and unless the Thakara shares his humble offerings. As a result, the entire community, including Laali and Bhagwanti, think Dhanna has lost his mind.

Where to watch Bhagat Dhanna Jatt