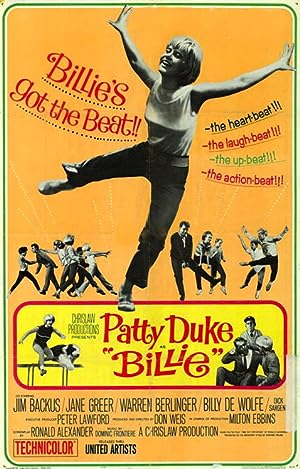 How to Watch Billie 1965 Online in The UK

The cast of Billie

What is Billie about?

Fifteen year old tomboy Billie Carol, the younger of two daughters of Harding mayoral candidate Howard G. Carol and his wife Agnes Carol, is naturally athletic. She attributes her speed to being able to hear what she calls "the beat": music she hears in her head, speeding up that music which makes her go faster in whatever activity. She catches the eye of her high school's track and field coach, the school which only has a boys' track and field team which she is asked to join. Her father encourages her to do so despite he having recently made a campaign speech to a group of young women on his stance that women should not compete with men. This dichotomy causes a problem in his campaign. Another potential problem in the campaign is some unknown information about his older daughter, twenty year old Jean, who is home from school and who he still sees as his little girl. Billie, on the other hand, is often viewed by Howard as the son he never had, which often causes problems in his relationship with her. But Billie has other problems, especially in her relationship with Mike Benson, a student new to school and an aspiring decathlete. Mike and Billie like each other in a boy/girl sense - her first case of young love - but does not know how to reconcile that feeling with Mike wanting her to be a girl first and a track star second.

Where to watch Billie