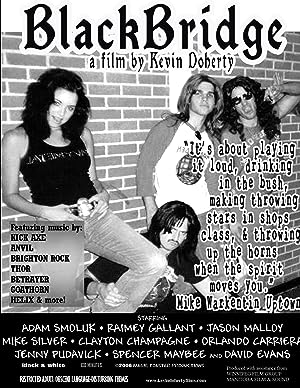 How to Watch Black Bridge 2006 Online in The UK

The cast of Black Bridge

What is Black Bridge about?

Clive, Eddie, Sammy, Tracey, Gomer and Adrian , a close-knit group of "headbanging" friends all have an equal passion for Heavy Metal music, partying and experimenting with the occult and supernatural. When the mutilated body of murdered 12 year-old Mikey Gay (brother of the Hellrats' feared, trouble-making gang-leader Vinny) surfaces in Sammy's "Satanic Enshrined" bedroom, all six become prime suspects in the murder. Did one of the six teenagers take their interests in Black Magic a little too far? Or was Mikey murdered at the hands of someone else? This coming of age tale represents a different side of the 80's that has never been chronicled until now...

Where to watch Black Bridge