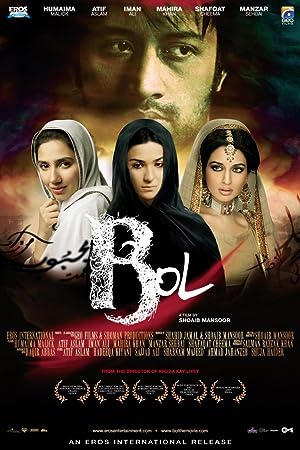 The cast of Bol

What is Bol about?

Zainub Khan has been found guilty by Pakistan's Courts and is to be hanged. Her last wish is to tell her story before the media, and after approval, she relates how her family was compelled to leave Delhi during 1948 and re-locate to Lahore. This is where her father, Hakim Sayed Hashmutallah Khan, married Suraiya, and hoping to sire a son, instead ended up with 7 daughters. The 8th child turned out to be a hermaphrodite and Hashmutullah wanted it dead but Suraiya insisted that she will not let anyone know so as not to shame her husband. They named the child Saifullah, and hired a tutor to teach him at home. After a failed marriage, Zainub returns home, notices that the tutor was molesting her brother and asks him to leave. With dwindling income from his father, unable to attend school, his mother giving birth to still-born babies, his siblings uneducated, Saifullah is then himself compelled to seek employment. It is here he will be sexually molested and subsequently killed by his father, who bribes the police by embezzling Rs.2 Lakhs from the Masjid where he presides as a Khajanchi. In order to return the money to the Masjid, he starts to tutor children of prostitutes with the help of Saqa Kanjar. When their neighbor's son, Mustafa, proposes marriage for his daughter, Ayesha, he refuses, as they are Shiah, and plans to marry her to a much older male. Things will change rapidly when Saqa will make a proposition that will change everyone's lives forever.

Where to watch Bol