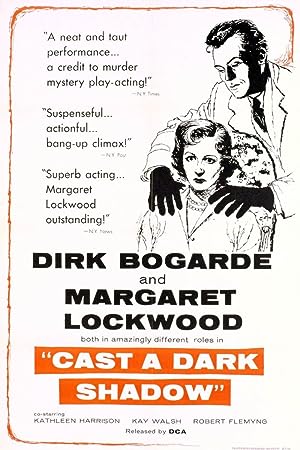 The cast of Cast a Dark Shadow

What is Cast a Dark Shadow about?

A clever fortune-hunter with a penchant for murder does in his elderly, supposedly rich, wife and manages to get away with it. After an investigation results in a decision of 'accidental death', our crafty killer discovers that his late wife's 'fortune' is not what he thought it was. Driven to find another unsuspecting spouse; he discovers that his new bride, a widow, is no fool. When she tells him that she intends to keep her accounts separate from his, he is driven to contemplate murder once again.

Where to watch Cast a Dark Shadow