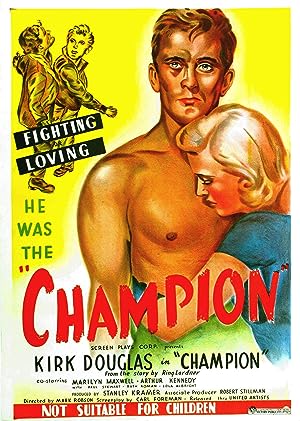 How to Watch Champion 1949 Online in The UK

The cast of Champion

What is Champion about?

Midge Kelly, hitchhiking west with lame brother Connie, is hustled unprepared into a pro boxing match. Though he's severely beaten, manager Tommy Haley finds him promising. Arrived in California, Midge and Connie find nothing but a menial job from which Midge gets relief by seducing Emma, a lovely young waitress. One shotgun marriage later, ambitious Midge falls back on the only option he knows: boxing. Seduced by cheering crowds, money, and a succession of blondes, Midge becomes more and more of a hero in public...and a heel in private.

Where to watch Champion