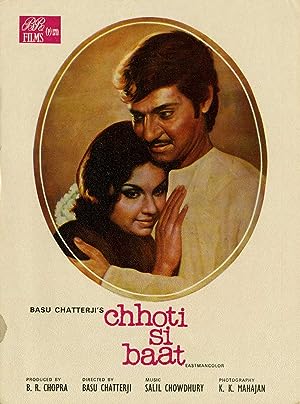 How to Watch Chhoti Si Baat 1976 Online in The UK

The cast of Chhoti Si Baat

What is Chhoti Si Baat about?

Arun (Amol Palekar) is a shy accountant in Bombay who dreams of romancing Prabha (Vidya Sinha), but never gets past following her around without managing to actually speak up. While Arun twiddles his thumbs, suave Nagesh (Asrani) steps into the picture and turns on the heat, prompting Arun to take "love coaching" from "romance specialist" Julius Nagendranath (Ashok Kumar) to win Prabha back. One of the funniest Hindi films of the 70s - is a nostalgic favourite for its quirky take on pre-hypercongestion Bombay. The film established Amol Palekar as having an uncommon comic talent for playing mousy characters, a role he would repeat several times in his career.

Where to watch Chhoti Si Baat