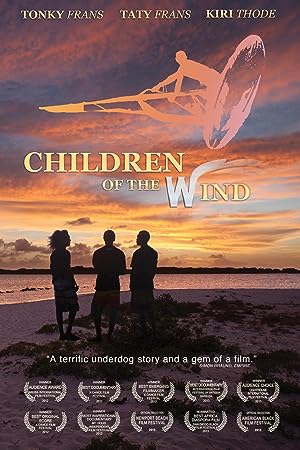 The cast of Children of the Wind

What is Children of the Wind about?

Narrated by Gbenga Akinnagbe 'Children of the Wind' tells the story of the Bonaire windsurfers, a group of native Caribbean kids, who under the mentor ship of the remarkable Elvis Martinus, founder of the Bonaire Aquaspeed windsurfing club, overcame insuperable odds to not only dominate an inherently elitist sport but to revolutionize it. In fact, they single-handedly saved windsurfing from a steep decline, attracting new, younger participants eager to learn to freestyle the Bonairian way. The film focuses on brothers Tonky and Taty Frans and their cousin Kiri who come from a poor fishing family and began windsurfing before the age of ten, using whatever broken or discarded equipment they could scrounge, and who are now, twenty years later, global superstars. Tonky, Taty and Kiri burst onto the international scene in 2001 when, along with thirty or so other Bonaire sailors, they attended windsurfing's North American Championship in Florida. Given the island's economic status, just getting to Florida was an achievement in itself. Once there, they caused a sensation, taking home twenty trophies between them. Given that Bonaire has a population of under 15,000 and had, at the time, no way to fund formal training facilities, provide equipment or pay for travel to events, this accomplishment was simply astonishing. The Frans brothers and Kiri are now among the top five freestyle windsurfers in the world and have become local heroes on their island. More remarkable: Bonaire continues to produce young champions at every age category of the ProKids World Championship, which started on the island. Set against the backdrop of the 2011 Freestyle Windsurfing World Cup on Bonaire, 'Children of the Wind' is an exciting tale of kids who refused to be defined by the limits of their circumstance, and consequently transformed a sport.

Where to watch Children of the Wind

More Documentary tv shows like Children of the Wind