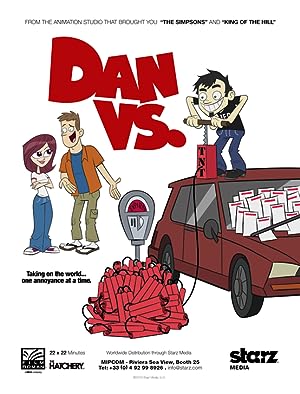 How to Watch Dan Vs. Online in The UK

The cast of Dan Vs.

What is Dan Vs. about?

A rude, crude, and scruffy curmudgeon named Dan tries to get revenge on anyone and anything that angers him. His misadventures are coupled with his best friend and summer camp buddy, Chris, and occasionally the skills of Chris's secret operative wife, Elise. Dan's misadventures unfortunately places him in odd circumstances, from a jogging werewolf to the depths of the Pasadena Parallelogram, Dan's many adventures pertains towards many slap-stick and original laughs -- much towards the dismay that plagues Dan. Accompanied by his lovable pet cat, Mr. Mumbles, much of Dan's angers can't but subside, ceasing by the lovable cuteness of his prized cat. Catburglars, Baseball, Dancing, High School, Canada, Ninjas, Dentists, Dinosaurs, George Washington -- are no match for this angry hermit. Look out world, here comes the hair-trigger ruffian, Dan.

Where to watch Dan Vs.