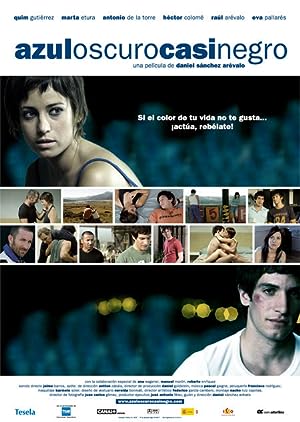 What is Dark Blue Almost Black about?

Jorge is a 25-year old janitor who desperately tries to find himself a new, and especially, better, job. This undertaking is complicated by the fact he takes care of his handicapped father who had a hart infarct seven years earlier. His soon-to-be-released brother Antonio finds a girlfriend (Paula) in jail who wants to get pregnant. When Antonio finds out he's infertile, Jorge is asked to make Paula pregnant. To make the dilemma even heavier, Jorge's childhood sweetheart Natalia returns after many years. Meanwhile, Jorge's best friend Israel (nicknamed Sean) secretly photographs men visiting an erotic masseur to find out something he didn't bargain for.