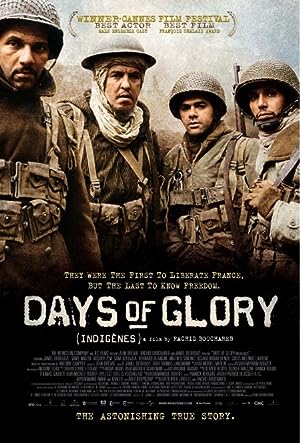 How to Watch Days of Glory 2006 Online in The UK

The cast of Days of Glory

What is Days of Glory about?

Algeria, 1943, through Italy and France, to Alsace in early 1945, with a coda years later. Arabs volunteer to fight Nazis to liberate France, their motherland. We follow Saïd, dirt poor, an orderly for a grizzled sergeant, Martinez, a pied noir with some willingness to speak up for his Arab troops; Messaoud, a crack shot, who in Province falls in love with a French woman who loves him back; and Abdelkader, a corporal, a budding intellectual with a keen sense of injustice. The men fight with courage against a backdrop of small and large indignities: French soldiers get better food, time for leave, and promotions. Is the promise of liberty, equality, and fraternity hollow?

Where to watch Days of Glory