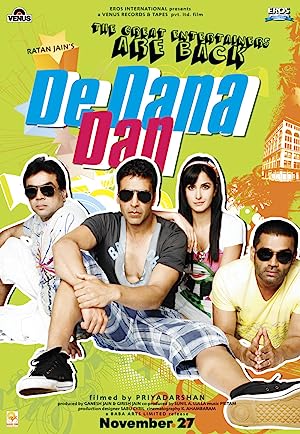 The cast of De Dana Dan

What is De Dana Dan about?

Singapore-based Nitin Bankar's education was paid for by his employer, Kuljeet Kaur, and he, after the passing of his father, works as an unpaid maid-chauffeur for her until such time he pays off whatever she had spent. He is in love with gorgeous Anjali Kakkad but her father refuses to give his consent for this alliance. Desperate to get out of this situation, Nitin attempts suicide, albeit in vain, and then cooks up a scheme to abduct Kuljeet's pet, Mulchand, demand a hefty ransom, and then marry Anjali. He seeks assistance from his equally deadbeat-courier deliveryman, Ram Mishra, who wants to wed tall and pretty Manpreet Oberoi, and both book a room in Pan Pacific Hotel. However, Murphy's Law and a host of assorted characters get involved - resulting in hilarious and uncontrollable chaos.

Where to watch De Dana Dan