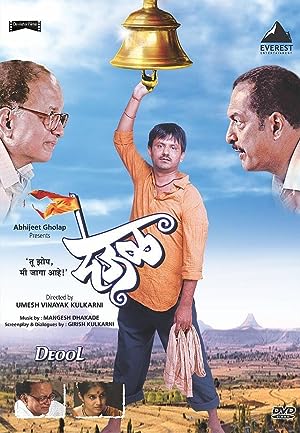 How to Watch Deool 2011 Online in The UK

The cast of Deool

What is Deool about?

In the rural areas of Maharashtra lies a peaceful village called Mangrul. One day Keshav (Girish Kulkarni), a village youth, sees lord Dattatrey (Datta) in his dreams while taking a nap under a tree. He makes a hue and cry in the village saying God made an appearance for him. Anna (Dilip Prabhavalkar), most respected figure of Mangrul, advises him against announcing such personal matter as it's a question of faith. However, it is too late as a journalist (Kishor Kadam) sensationalizes the news about Lord Dattatrey making an appearance in Mangrul. There is now a demand for a Dattatrey temple. Bhau (Nana Patekar), a political activist, doesn't approve it as he wants the funds to be used for better purposes but he seems helpless. The temple is built and the village becomes a holy place. Mangrul goes through a 360 degree change due to commercialization but nobody is complaining except Anna. Soon, blinded by the commercial progress, God is forgotten. Every village has a right to progress commercially but how ethical it is to use a temple and its God to achieve it? The question is raised by Writer Girish Kulkarni & Director Umesh Vinayak Kulkarni's latest offering 'Deool', without being judgemental. While it does this, the audience is treated to some quality cinematic experience which is enlightening.

Where to watch Deool