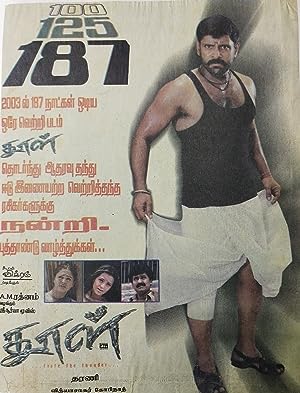 How to Watch Dhool 2003 Online in The UK

The cast of Dhool

What is Dhool about?

Arumugham (Vikram) is an uneducated, good hearted, helpful village hick. Easwari (Jyothika) is his childhood friend. A chemical factory in the village pollutes the local river and when all attempts to stop the factory waste from going to the drinking water falls flat, the villagers decide to send Arumugham to Chennai and meet the concerned minister who has won from their constituency. He sets out for the city with Easwari and her grandmother and they stay with Arumugham's friend (Vivek) and gang. Swapna (Reema Sen) is a model who stays in the same area and she lusts after Arumugham. They meet the Minister (Sayaji Shinde) who is extremely nice to them and promises to help them. Soon Arumugham is forced by circumstances to fight against an anti-social gang with a lady boss. An honest police officer (Manoj.K.Jayan) tries to collect evidence against the criminal gang. When Arumugham realizes that the bad guys are the henchmen of the same Minister who is behind all the crimes, !

Where to watch Dhool