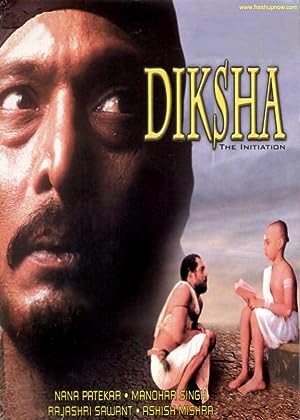 How to Watch Diksha 1991 Online in The UK

The cast of Diksha

What is Diksha about?

Circa British Rule in India, a man vows to make his only surviving son, Narayan, alias Nani, a Brahmachari to atone for the deaths of five of his children. He takes this child to a remote village in Karnataka, South India, where he leaves his 11 year old son in the care of a learned Archarya, Udup Pandit. Here Nani gets to meet two other disciples of the Archarya, as well as his widowed daughter, Yamuna, and another male by the name of Shrikar Upadhyay, who also teaches the British how to read and write in Hindi. The Archarya goes away for a few days, and when he returns nothing is the same anymore. His daughter is pregnant, the villagers are all set to remove her from the village, they are also angry with him for refusing Yamuna to follow the traditional way a Hindu widow. The Archarya must now find out who impregnated his daughter - whether it was one of his two young disciples; an untouchable male named Koga Pandit, or was it young Nani. The Archarya must also decide what is to be done with Yamuna as it is up to him now to decide her fate, not that he has many choices - for the prescribed Hindu punishment for this is - death.

Where to watch Diksha