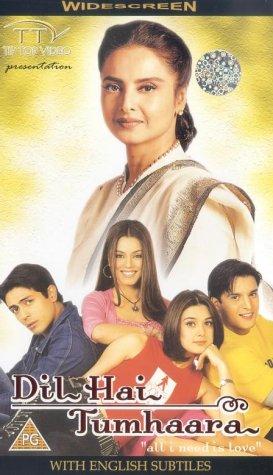 How to Watch Dil Hai Tumhaara 2002 Online in The UK

The cast of Dil Hai Tumhaara

What is Dil Hai Tumhaara about?

Percocious Shalu has determined that she is in need of employment, and does get one with Khanna Industries, with a fair amount of false information. She meets with the owner's son, Dev Khanna, and thinks he is the driver, and treats him as such. Together they masquerade to help the poor farmers in the community, and both fall in love. An attempt is made to kill Dev by angry management employees, but Shalu's sister, Nimmi, rescues Dev, and is herself injured in the process. Dev looks after her, and Nimmi thinks he is in love with her, as she is with him. Nimmi tells her mom, Sarita, about Dev, and Nimmi goes to see Dev's dad and arrange their marriage, and it is then Sarita finds out that Shalu has been flirting with Dev. Shalu is told the truth about her birth, given an ultimatum by Sarita to stop flirting with Dev, to which Shalu agrees. The question is will Dev also fall in line, or will he marry Nimmi, as Shalu's birth is questionable.

Where to watch Dil Hai Tumhaara