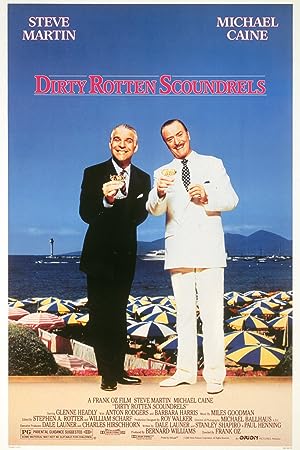 How to Watch Dirty Rotten Scoundrels 1988 Online in The UK

The cast of Dirty Rotten Scoundrels

What is Dirty Rotten Scoundrels about?

Wealthy native Brit Lawrence Jamieson, living in Beaumont-sur-Mer on the French Riviera, earns most of his money through big cons on wealthy unsuspecting women. With the help of his associates -- corrupt police Inspector Andre, who provides him most of his intel, and his butler Arthur -- he pulls scams such as pretending to be a foreign deposed prince who needs money to finance a secret war to liberate his people. Beaumont-sur-Mer, and thus his world, is invaded by brash American Freddy Benson, another con man whose targets are also wealthy unsuspecting women. Lawrence believes Freddy is the Jackal, a con man whose true identity is unknown but who is known to be working his way through Europe. While Lawrence works on thousands of dollars per scam, Freddy works only on tens or if he is lucky hundreds of dollars. Lawrence's efforts to get Freddy out of his territory are unsuccessful, so when Freddy figures out that Lawrence is a con man like he is, he decides to blackmail Lawrence to work under him to learn the art of the sophisticated and thus earn more lucrative con. Eventually, Lawrence and Freddy have a difference in how to operate their joint cons, so they issue each other an ultimatum: the person who is able to con a mark out of $50,000 first will get the French Riviera as their territory, with the other having to leave forever. Whom they choose is naive and slightly bumbling American "soap queen" Janet Colgate, who has just arrived in the area. The nature of how each tries to get the $50,000 from Janet changes over time, each needing to play off the other's con. But their focus may change with more information learned about the situation, as well as some external factors they did not anticipate.

Where to watch Dirty Rotten Scoundrels