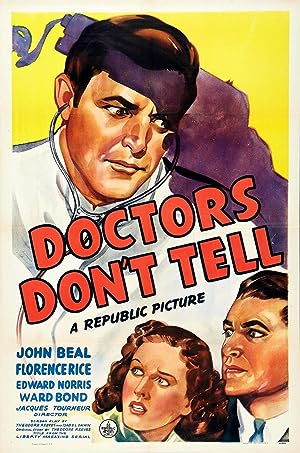 How to Watch Doctors Don't Tell 1941 Online in The UK

The cast of Doctors Don't Tell

What is Doctors Don't Tell about?

Dr. Ralph Snyder and Dr. Frank Blake open an office together but soon split over a rivalry for nightclub singer Diana Wayne and a difference over ethics. In an effort to make some quick money and marry Diana, Blake becomes a retainer for gangster Joe Grant while the upright (and uptight) Sawyer becomes a medical examiner in the district attorney's office. Grant is involved in a murder and forces Blake to remove an identifying scar, thereby proving that all gangsters should keep a doctor on retainment. But Blake has a change of heart and shows up at Grant's trial, spills the beans and Grant is convicted. Consequently, Blake loses his license, Diana and then his life, proving that the "do-tell' doctor should have heeded the film title.

Where to watch Doctors Don't Tell