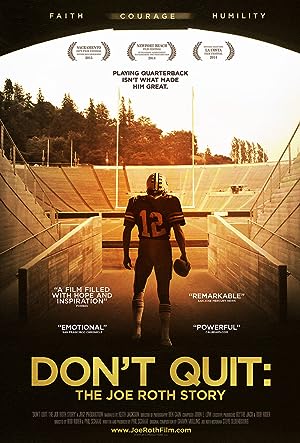 How to Watch Don't Quit: The Joe Roth Story 2014 Online in The UK

The cast of Don't Quit: The Joe Roth Story

What is Don't Quit: The Joe Roth Story about?

That rare phoenix, Joe Roth came to Cal in 1975 as a melanoma survivor and led the Golden Bears to a co-championship of the Pac-8. A Heisman Trophy favorite in 1976, Joe's story took an unexpected turn when his cancer returned during the season. Not only did he continue to play, but Joe kept his deteriorating condition a private matter. His personal battle is, quite simply, the greatest secret in the history of college sports and the courage, dignity and grace with which he lived his life transcendent. Don't Quit: The Joe Roth Story is the authorized documentary that chronicles his remarkable life.

Where to watch Don't Quit: The Joe Roth Story