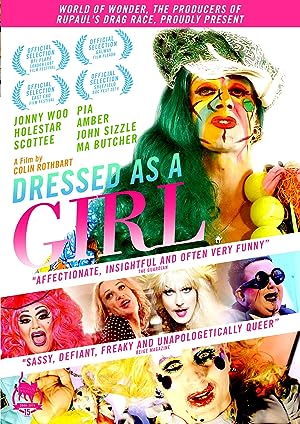 The cast of Dressed as a Girl

What is Dressed as a Girl about?

Filmmaker Colin Rothbart pulls off the wigs, wipes off the mascara to unveil the real people behind the much hyped and talked about East London's alternative drag scene. Overeating, gender dysphoria, egos, excess. Following in the tradition of Paris Is Burning and The Cockettes, and DRESSED AS A GIRL is so much more than show-stopping performances. Filmed over five years, the film covers not only the rise and fall of this hugely popular gay club scene but also offers some personal, emotionally honest portraits of six individuals at the heart it. Fundamentally it's about the nature of friendship, life and even survival against the odds, universal themes that everyone can relate to.

Where to watch Dressed as a Girl

More Biography tv shows like Dressed as a Girl