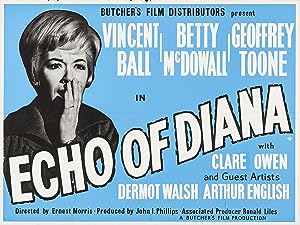 How to Watch Echo of Diana 1963 Online in The UK

The cast of Echo of Diana

What is Echo of Diana about?

Joan Scott is distraught at the death of her husband in a plane crash. However, all is not as it seems. Joan has reason to believe that there is more to this than meets the eye and begins to investigate her husband's mysterious death and the involvement of a woman known simply as 'Diana'.

Where to watch Echo of Diana