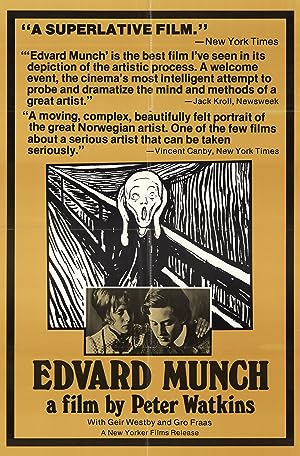 How to Watch Edvard Munch 1974 Online in The UK

The cast of Edvard Munch

What is Edvard Munch about?

Following a rough chronology from 1884 to 1894, when Norwegian artist Edvard Munch began expressionism and established himself as northern Europe's most maligned and controversial artist, the film also flashes back to the death from consumption of his mother, when he was five, his sister's death, and his near death at 13 from pulmonary disease. The film finds enduring significance in Munch's brief affair with "Mrs. Heiberg" and his participation in the café society of anarchist Hans Jaeger in Christiania and later in Berlin with Strindberg. Through it all comes Munch's melancholy and his desire to render on canvas, cardboard, paper, stone, and wood his innermost feelings.

Where to watch Edvard Munch