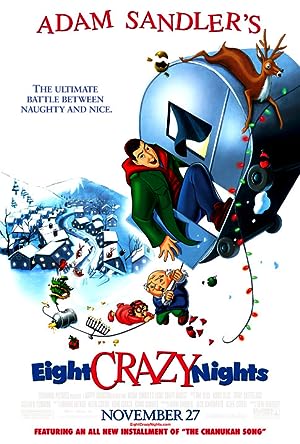 How to Watch Eight Crazy Nights 2002 Online in The UK

The cast of Eight Crazy Nights

What is Eight Crazy Nights about?

Adam Sandler invites you to share some holiday cheer in the new, no-holds-barred musical comedy Adam Sandler's 8 Crazy Nights. Davey Stone, a 33-year old party animal, finds himself in trouble with the law after his wild ways go too far. In keeping with the holiday spirit, the judge gives Davey one last chance at redemption-spend the holiday performing community service as the assistant referee for the youth basketball league or go to jail. Davey thinks he's gotten off easy until he meets Whitey Duvall, the eccentric, elf-like head referee. The mismatch between Whitey's good heart and never-ending optimism and Davey's constant troublemaking soon have them both wondering if going to jail wouldn't have been easier! In this new, full-length animated feature about basketball, old girlfriends, holiday spirits, and the mall, Adam Sandler voices the three lead characters of Whitey, Davey, and Whitey's fraternal twin sister Eleanore!

Where to watch Eight Crazy Nights