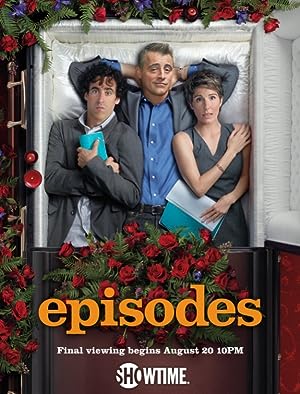 How to Watch Episodes Online in The UK

The cast of Episodes

What is Episodes about?

British writer-producers Beverly and Sean Lincoln (Tamsin Greig and Stephen Mangan), have a wonderful marriage and a hit TV series to their credit. Things couldn't be better. Until Merc Lapidus (John Pankow), a Hollywood network executive, gushes over their series at a gala. Merc is certain that a remake of the show will go over well with an American audience. After making the Lincolns a lucrative offer, they pack up and ship out to the States. It doesn't take long for them to figure out that Hollywood is a place where deals are made and broken in the same breath. They soon find themselves holding on tight as creative control of their show starts to slip away from their hands. Merc ultimately dismisses the original star, an elder, distinguished, gentleman, for 'Friends' actor 'Matt LeBlanc', a charming, yet manipulative beast, with a grocery list of demands. Hollywood is not what the Lincolns had in mind, but Sean believes he can swim with the sharks. As for Beverly, she'd rather go back to the UK than deal with these Episodes.

Where to watch Episodes