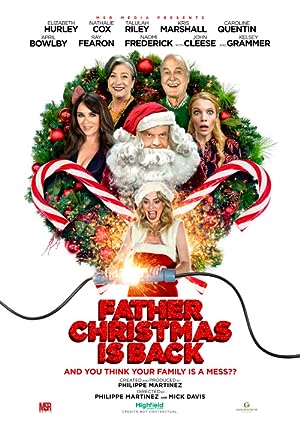 The cast of Father Christmas Is Back

What is Father Christmas Is Back about?

FATHER CHRISTMAS IS BACK is a comedy centered around four very different sisters who have reunited for the Christmas Holiday in Caroline and Peter's Yorkshire mansion. CAROLINE CHRISTMAS-HOPE is a control freak, who desires nothing more than a perfect Christmas to atone for the fact that their father, JAMES, abandoned the whole family on Christmas Day, many years ago. JOANNA CHRISTMAS is a fashion editor, who likes expensive clothes almost as much as she hates the countryside and children. She has brought along her new city boy lover, FELIX for the festivities. VICKY CHRISTMAS is a man eater who changes boyfriends as often as most people change their underwear. PAULINA CHRISTMAS is an introverted music professor who has been writing her PhD thesis on The Beatles for a decade. Also along for the festive rollercoaster ride is their butter-wouldn't-melt mother, ELIZABETH CHRISTMAS; their plain-speaking farmer uncle, JOHN CHRISTMAS; Caroline's long-suffering husband, PETER; and their two children: prepubescent DAISY (12), and chocolate-smothered HENRY (7). The arrival of JAMES, their long-lost father, and his 35-year-old American girlfriend JACKIE ruins Caroline's hope for the perfect Christmas and sets off a series of mishaps, inconveniences and misconstrued misunderstandings that uncover the long-buried secret that tore their family apart, so many years ago.

Where to watch Father Christmas Is Back

More Comedy tv shows like Father Christmas Is Back