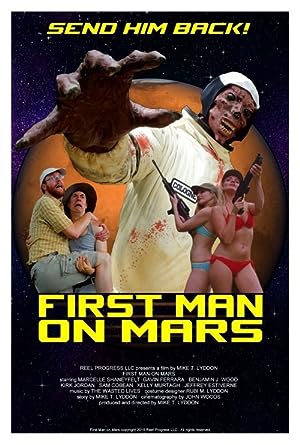 The cast of First Man on Mars

What is First Man on Mars about?

A secret mission. A horrifying discovery. The countdown to terror has begun! In 2003 billionaire astronaut Eli Cologne began his journey through space to become the first man on Mars, but something went horribly wrong.. Infected by an alien organism on the red planet, he returned to Earth a crazed, savage monster with an unquenchable thirst for human flesh. The space craft crashed undetected in a remote part of Louisiana during Hurricane Katrina, and he's been hunting both human and animal prey in the swamps for years. Beautiful yet domineering scientist Dr. Martine Munro was in charge of the Mars Mission and Eli Cologne's secret lover. Now that she's received a signal from the transmitter on the lost space craft, she and a few bumbling, nerdy scientists head to the sleepy town of Black Bayou in search of the lost astronaut. For small town sheriff Dick Ruffman, it's a race against time to find the man-turned-monster before he kills again in this horrifying and hilarious satire of low budget drive-in Grindhouse creature features from the 1970's.

Where to watch First Man on Mars