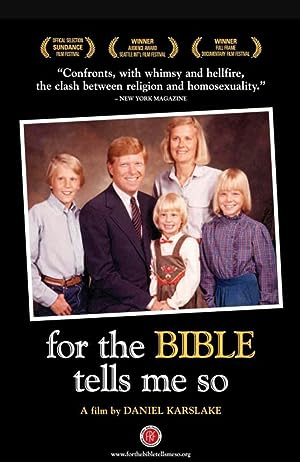 The cast of For the Bible Tells Me So

What is For the Bible Tells Me So about?

We meet five Christian families, each with a gay or lesbian child. Parents talk about their marriages and church-going, their children's childhood and coming out, their reactions, and changes over time. The stories told by these nine parents and four adult children alternate with talking heads - Protestant and Jewish theologians - and with film clips of fundamentalist preachers and pundits and news clips of people in the street. They discuss scripture and biblical scholarship. A thesis of the film is that much of Christianity's homophobia represents a misreading of scripture, a denial of science, and an embrace of quack psychology. The families call for love.

Where to watch For the Bible Tells Me So

For the Bible Tells Me So Trailer

More Documentary movies like For the Bible Tells Me So

More Documentary tv shows like For the Bible Tells Me So