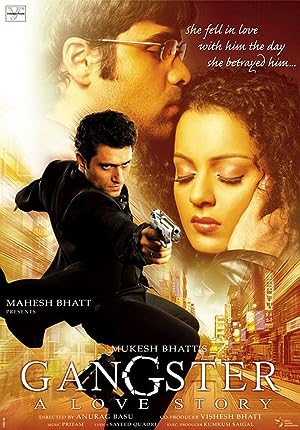 How to Watch Gangster 2006 Online in The UK

The cast of Gangster

What is Gangster about?

Daya Shankar lived with his family in Kashmir, but then subsequently re-located to Bombay where he took to crime as a career. One day while on the run from the Police, he holes up in a small room with a young bar dancer, Simran. She shields him from the Police, and he falls in love. He finds out the bar she dances in and comes in silently to watch her perform. He had come to her rescue when she was being molested and thereafter asked her to move in with him, which she did. For sometime it was as though they seemed to be living in bliss, then all of a sudden, they were on the run again. Then Daya decided that it was time to settle down, and they adopted a young boy, Bittu, made different passports, and decided to re-locate to Dubai. That did not happen, instead Bittu gets killed, and a heart-broken Simran and Daya are forced to live apart, with Simran moving to Seoul, Korea. It is here that she meets with Akash and both fall in love, get intimate and Simran gets pregnant. Then Daya re-enters her life, disrupting it completely, beating Akash to a pulp. It is now that Simran has to decide whether to stay with Akash, get married, and have her baby, or continue to live a life on the run with Daya - who is not only on the run from the Police, but also from the underworld Don, Khan. What the three players do not known that two of them are going to be betrayed - a betrayal so shocking that none of them may be able to survive it.

Where to watch Gangster