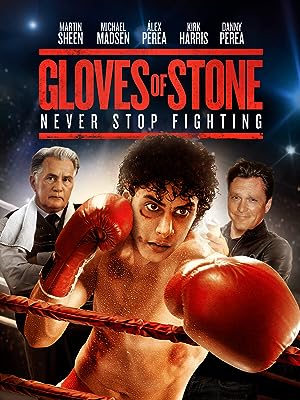 How to Watch Gloves of Stone 2009 Online in The UK

The cast of Gloves of Stone

What is Gloves of Stone about?

Young Abner Torres wants to pursue professional boxing as his means to escape the pervasive poverty, prostitution, drug dealing and bullying police of his Mexican city. His abusive father already exploits him in illegal matches, keeping for himself whatever money Abner makes from it. Personal support comes Abner's way from his sister Silvana, best friend Wilo and girlfriend Paulina. Local physician Dr. Frank Irwin, a caring influence in the neighborhood, also takes an active interest in guiding the lad off the streets. Frank's son is Jimmy 'the Dream' Irwin, who is himself trying to make a boxing mark in American despite getting a little too old for the sport and nursing a broken hand. At Silvana's intercession, Jimmy begins training Abner at the local gym while beginning to fall for his sister. Just as things are looking good for Abner's chances, tragedy strikes, threatening to derail everyone's efforts to see him leave the ghetto.

Where to watch Gloves of Stone