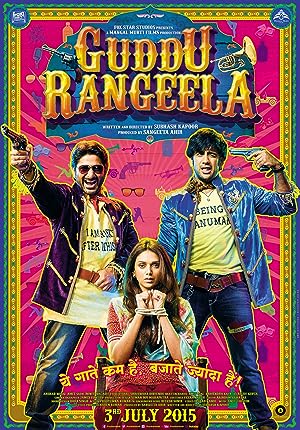 How to Watch Guddu Rangeela 2015 Online in The UK

The cast of Guddu Rangeela

What is Guddu Rangeela about?

Based in the dusty plains of North India, Guddu Rangeela is a story about two cousins trying to make ends meet in the crime infested surroundings. Orchestra singers by day and informants by night, acquiring measly pay offs from the information provided to local gangsters about the richest families in town, has fetched them an easy and safe way to subsist without getting their hands dirty in the bargain. Although cousins by blood, both are very much unlike each other. The love hate rapport of the two comes to be seen through the many dangerously funny circumstances that they are met with and their impromptu methods of saving their skin each time. Having suffered a tragic past at the hands of the gang lord turned politician Billo; the antagonist of the tale; both are discreetly entangled in a 10 year old legal battle against him through Gupta, an honest advocate fighting on their behalf. While the unorthodox and impulsive Guddu aspires to grow out of their hand to mouth way of life by executing the loot themselves, the comparatively self-righteous and mature Rangeela despises the idea of getting onto the dark side of the city's law. Like money, women too are Guddu's poison, who is time and again seen flirting and effortlessly pulling off one night stands. Rangeela on the contrary hasn't moved on from the tragedy that consumed his only love Babli years back. Rangeela's prime motto has always been to overthrow his nemesis Billo, thus undoing the injustice and cruelty that transpired years back. Lucky enough, one such opportunity comes knocking, which he immediately snags and in the process finds himself confronting the vicious and tyrannical Billo. What follows is a chaotic tale of redemption and payback. An ambition, a plan, a kidnapping and a to and fro tale of victory and defeat leading up to a dramatic climax.

Where to watch Guddu Rangeela