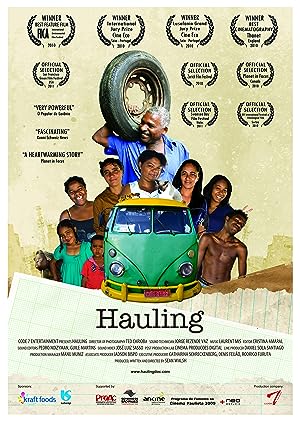 How to Watch Hauling 2010 Online in The UK

The cast of Hauling

What is Hauling about?

Often regarded as a marginal society, the recycling underworld of São Paulo - Brazil's largest metropolis - is the backdrop to the touching story of Claudines and his family. 'Hauling' reveals the day-to-day life of this man, a father to over 27 children, and of many others who make their living out of collecting and recycling material that others have thrown out. In order to do this, Claudinei routinely visits the downtown neighborhood of Santa Efigênia in his lime-green VW bus. A regular visitor for over 5 years, he is well known by the local shopkeepers and residents, who often donate not only the usual cardboard and plastic, but also other used goods, such as computer parts which he restores and sells. Claudinei and his family serve as a symbol of the thousands of people in Brazil who resort to recycling in order to make a living and suffer prejudice and discrimination as a result. This film shows us the intimate workings of that universe in an effort to stimulate recycling and to expose these individuals as followers of a noble and respectable way of life.

Where to watch Hauling