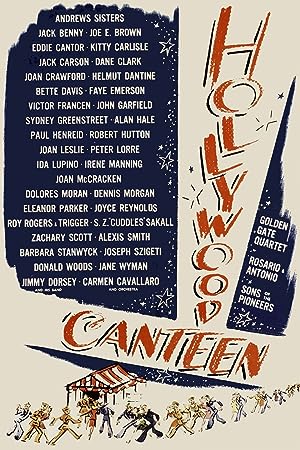 How to Watch Hollywood Canteen 1944 Online in The UK

The cast of Hollywood Canteen

What is Hollywood Canteen about?

Two soldiers on sick leave spend three nights at the Hollywood Canteen before going back to active duty. With a little friendly help from John Garfield, Slim gets to kiss Joan Leslie, whom he has been dreaming about while in the Pacific. He meets her later at the Farmer's Market. On the third night, Slim is the millionth man into the Canteen, earning him a date with Joan. Slim thinks he's been duped when she doesn't show up at his train. Slim's buddy Sergant dances with Joan Crawford. Canteen President Bette Davis praises the canteen and the war effort. Virtually everyone Warners could spare entertains.

Where to watch Hollywood Canteen