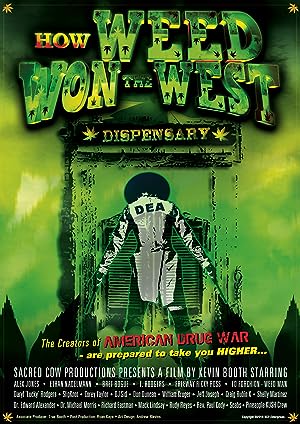 The cast of How Weed Won the West

What is How Weed Won the West about?

With California and the rest of the country going bankrupt, one business is booming. 'How Weed Won the West' is the story of the growing Medical Marijuana industry, focusing on Los Angeles with over 700 legal dispensaries doling out the buds. Following the story of Organica, a southland dispensary which was raided by state and federal agencies in August of 2009, the film shows that although much has changed with Obama in office, the drug war is nowhere near over. Kevin Booth, producer/director of American Drug War, picks up where the last film left off and continues his fight against the hypocrisy of the War on Drugs. Intended to inform and entertain, this fast paced and even sometimes funny film features Texas conspiracy guru Alex Jones, Ethan Nadelmann head of Drug Policy Alliance, and a host of amazing characters including a former LAPD narcotics officer who now thinks all drugs should be legal. Even to someone who has not consumed weed in decades, this film definitely opens anyone's eyes concerning the detrimental economic, social and human ramifications created by marijuana prohibition. It takes the viewer through a journey of real life stories involving the relatively new California legal marijuana industry using a refreshing angle which does not focus strictly on the medicinal value of marijuana. The widespread responsible consumption of marijuana for personal recreation and mood enhancement is addressed as well.

Where to watch How Weed Won the West

More Documentary movies like How Weed Won the West

More Documentary tv shows like How Weed Won the West