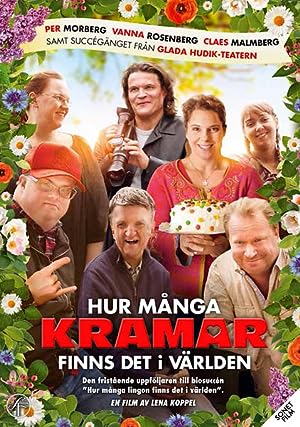 How to Watch Hur många kramar finns det i världen? 2013 Online in The UK

The cast of Hur många kramar finns det i världen?

What is Hur många kramar finns det i världen? about?

A drama-comedy about Max, a successful New York-based commercial cinematographer, who is disillusioned and alone. He has a very low opinion of love, romance and emotions. One day Max is contacted by his old childhood friend Peter, who invites him to come to a small Swedish city Hudiksvall and help him make a film about his daughter's friends. Max , who sees this as an opportunity not only to reconnect with his old friend, but to rekindle his lust for life, accepts the offer and leaves the hectic city behind for a nice relaxing summer in Sweden. It is only once Max gets there, he realizes that the main subjects of the documentary film he has promised to shoot, are about disabled persons. A detail that Peter "forgot" to mention. The meeting with the slightly hypochondrical Peter and his disabled daughter and her friends, gradually develops into an unpredictable stay in Sweden that turns Max's world upside down... The actors in the film are from the successful Glada Hudik Theatre, a theatre group with mentally handicapped actors. The Glada Hudik Theatre has made several productions on stage in Sweden performed in films and also had a successful show at Broadway.

Where to watch Hur många kramar finns det i världen?